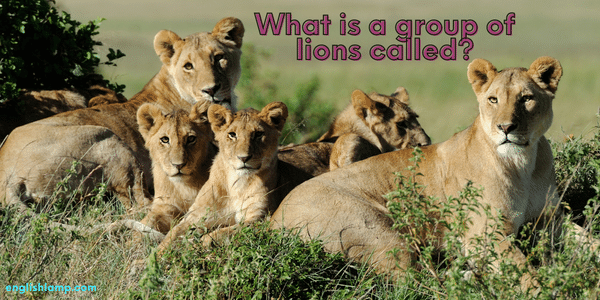 Lions are the strongest predators in wildlife. Male lions have a mane that makes them look impressive. They are considered the rulers of the animal kingdom.

There are 5 collective nouns for lions we can use. Let's have a look-

5 Collective nouns for a group of lions

So, when lions are together, we say they are in a group. And the collective noun for a group of lions is called a troop. There is always one lion that leads, whether they are wandering or hunting.

2. Pride of the lions

Lions are always together with their families. We can use the term pride and refer to them as the pride of lions when there are female lions, especially with both sexes' cubs. The male lion, the father of all the cubs, guards the pride. A pride consists of around 10 to 15 lions. There are some adult males and females with their cubs. Maximum members in the pride can be 35.

When young males mature, they leave pride, and females stay in pride permanently. The other male lion fights with the adult male lion to defeat him. The stronger male lion defeats others and becomes a part of the pride.

"A group of lions is collectively called a pride because of their stately quality."

Lions are at the top of the food chain; therefore, they are considered royals.

Get the words for Group of Animals

Another collective noun for the lions is Sowse. We can use Sowse for the group of lions that coexist.

Lions rest on tree branches, and when they come down, they seem graceful. The meaning of sault is an action of leaping down. Therefore, lions coexisting with one another are called a sault of lions.

Collective nouns for groups of lions are-

1. What is the collective noun of cubs of Lion?

Cubs live with their mother, and the collective noun of lions is pride.

We have seen above that lions live with their family, known as pride. A pride may comprise from 2 to 40 lions, including up to two, three, or four males, many females, and their young ones.

What Is The Collective Noun For a Group of Sheep Called?

Food and Eating: 50 Best Questions to Ask in Conversation

What Is The Collective Noun For a Group of Sheep Called?