We know about a noun, but so many people are curious to know what a common noun is, and it is essential to know to add value to our Grammar knowledge. We shall discuss the same in this article in an easy way. But first, we shall come to understand what a common noun is.

Let's have a look-

What is a common noun?

A common noun is the name of a general term that we use to name common people, places, ideas, objects, animals, birds, reptiles, and so on. In addition, common nouns include the names of different plants, geographical features, and many other things. We have discussed in the previous chapter that nouns are differentiated. That is, a common noun is different from a proper noun. Therefore, we shall discuss the difference between a common and a proper noun in this chapter.

Definition of a common noun

We can define a common noun properly as:

Examples of a common Noun

Here are some examples of common nouns that we see in –

How to use a common noun in sentences

We should keep some ideas in mind when we use a common noun in a sentence.

Here are some examples of common nouns. 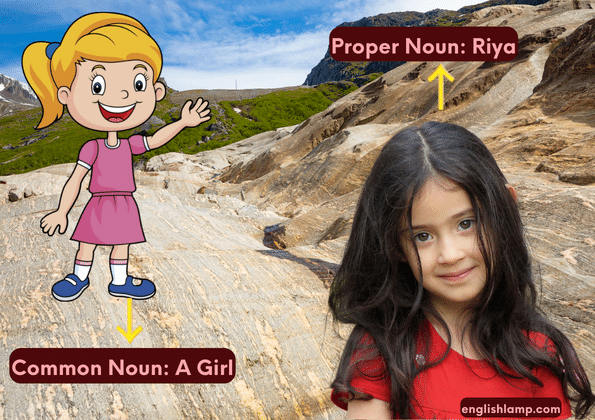 Common nouns and proper nouns are two types of nouns, but both contrast with each other. It means any noun is either common or proper according to the context of a sentence.

The difference between common and proper nouns is as-

♦ A common noun is a general name and refers to a group of the same things.

♦ A proper noun is a specific name given to a person, thing, place, and so on.

There are two parts to common nouns.

There is a description of these parts in the lessons themselves.

I hope you might get the term common noun.